The Conversion and Evolution of Houston’s Office Market Properties

With more than 36 skyscrapers, Houston’s skyline ranks as the 4th best in the U.S., according to stacker.com, and throughout that skyline are many historical gems that are increasingly being transformed from office buildings to hotels and/or residential dwellings. In an office market with a vacancy rate that’s been hovering at about 16% for several quarters, some landlords may consider capitalizing on their building’s historical features and shift away from the office sector and onto the hospitality/multifamily sector or take the plunge and undergo major renovations. 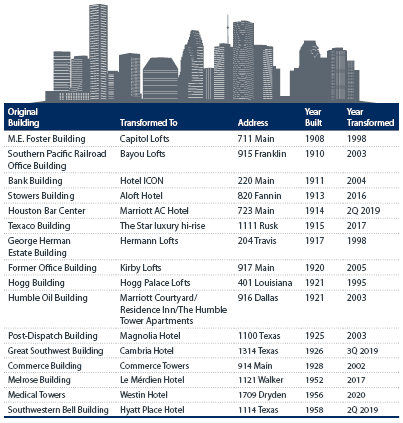 There are some buildings in downtown Houston that have stood for more than a century. Over the last 20 years we’ve seen close to 20 heritage structures go from C-suite to hotel suite with a single renovation overhaul sweep, as noted by downtownhouston.org. For example, the M.E. Foster Building at 711 Main was built in 1908 and nearly 100 years later was transformed into the Capitol Lofts. Just recently, office buildings at 1314 Texas Ave. and 1114 Texas Ave. kicked off hotel transformations that are slated to open later this year. So many other have also made the switch – Aloft Hotel, The Star Hi-Rise, Kirby Lofts and Le Mérdien Hotel are just a few examples.

However, the transformation from office to hotel/residential is not for every building. Most of these conversions have been with buildings erected in the early 1900s or during the 1950’s. The architecture during that time was ornate and grand, complete with lavish marble floors and ornamental ceilings, which would suit a luxury hotel or residential high-rise quite nicely. Now fast-forward to the construction surge of the late 1970’s and early 80’s that coincided with the oil industry boom. The building designs during that time frame are not exactly transformable into anything other than another office building. And why would they be? No one sets out to design a building that will transform from office to hotel decades later.

The most viable option for buildings of the 70-80’s era is to update and renovate. Those already jumping on that bandwagon include The Lyric Tower, Allen Center, Houston Center and Bank of America Center. Leasing is already slightly up for the Houston Center since renovations were announced. 80’s-era class A buildings are doing all they can to compete with what I consider a new class of building – class A+, buildings like Capitol Tower and Texas Tower. Renovations can only go so far. Building systems, bathrooms and lobbies can be upgraded, but it’s impossible to change the floor layouts and insert building floor activation to the street. Despite all of their remodeling efforts, some landlords are pressed to change their strategy to leasing to smaller tenants because larger tenants want the amenities and features offered in A+ buildings.

The Houston office market has always had a symbiotic relationship with the energy industry. When the oil glut hit in the mid-1980’s, construction came to a screeching halt and did not resume until the early 2000’s. Today, as we see the oil industry make a comeback, we are also seeing renewed activity with office construction, renovations and transformations throughout Downtown and Uptown Houston. The first quarter of 2019 has shown encouraging signs of progress for Houston’s office market with positive absorption and lower vacancy rates. I expect that trend to continue (at a slow pace) just as Houston’s skyline will continue to transform.

Author email: [email protected]
© 2021 Avison Young Inc. All rights reserved. No parts of this Blog may be reproduced in any form or by any electronic means without written permission from Avison Young. Except by a reviewer, who may quote brief passages in a review.
Subscribe to Blog
Popular Posts