A major housing crisis grips the U.K. and is set to have dramatic social and economic consequences for generations to come.

In response, cabinet ministers are targeting the construction of 300,000 homes per year by 2025. After just 184,000 were constructed in 2016-17, the target remains a formidable challenge to overcome.

In 2018, the Letwin review, an independent review of build-out rates led by MP Sir Oliver Letwin MP, highlighted the need for a variety of housing tenures to drive delivery rates, putting a particular emphasis on affordable housing. With private developers struggling to meet government targets alone, the key to unlocking the housing crisis lies in the delivery of more affordable homes and an increasingly interventionist approach from government at both a national and local level. Indeed, in a country with an abundance of empty homes (635,000, according to the U.K. government’s Ministry of Housing, Communities and Local Government ), the crisis is one of affordability, not just supply.

Let’s discuss what defines the term affordable housing, how it can maximise delivery and consider what role garden cities may have in unlocking the delivery of homes that communities can afford.

What is affordable housing?

Affordable housing has become a somewhat dirty phrase in the residential development industry, lamented by some developers as the barrier to viable projects and by others as not being truly affordable at all. Affordable housing is defined by the government through three broad strata:

It remains to be seen whether these tenures in isolation provide sufficient breadth to meet the needs of the population. Affordable rent was introduced in 2010 to stimulate the delivery of affordable housing; the increased rental income designed specifically to fund further development in lieu of government grants. However, occupants of affordable rented housing often required extra state support through housing benefits to pay the higher levels of rent compared to social rented housing. As a result, the veritable saving on the public purse was limited. In fact, the graph below shows that overall affordable housing delivery actually declined since affordable rent was introduced: 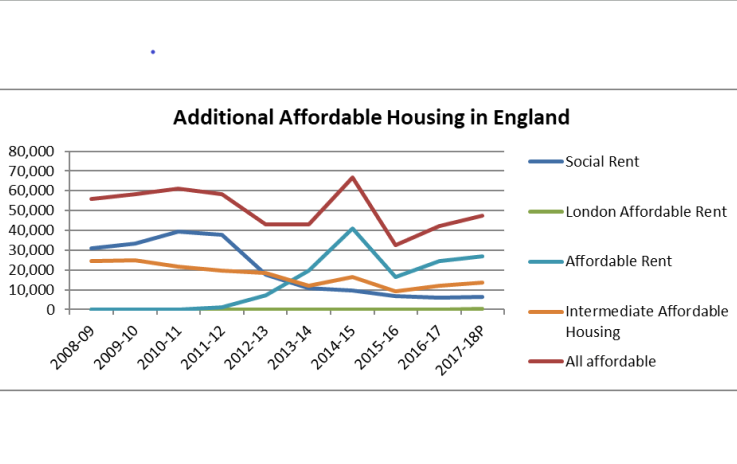 Diversity and affordability of housing product are widely accepted as the principle answers to accelerated housing delivery. Both the 2014 Lyons review, a report based on the findings of an independent group of 12 housing experts chaired by Sir Michael Lyons, and the Letwin review support this idea, stating that there is virtually limitless demand for affordable housing. However, a pertinent question remains: who is going to build it?

Traditional volume homebuilders have increased total housing output by 55% in the last five years and have a big role to play in reaching the federal government’s target. However, developers will not deliver housing in excess of absorption rates to ensure their profit margins remain healthy. Furthermore there is little incentive for developers to deliver more affordable tenures than government policy requires.

Housing associations have reverted to a cross-subsidy model (i.e. market housing subsidises the affordable) which, aside from the social criticisms, exposes them to a cyclical housing market slowdown. Given the pressure that these organisations have come under, it is hardly surprising; the average cost to build an affordable home has risen 42% in the last 10 years, whilst simultaneously government grants have dropped by two thirds. More grant funding is required to enable counter-cyclical sub-market rented homes to be built – which not only de-risks the housing associations’ position but also ensures that homes continue to be built during a market downturn. Homes England’s recent announcement that it will expand its range of interventions over and above grant funding provides encouragement that this trend can be reversed.

Local authorities have a growing role to play. The recent abolition of the Housing Revenue Account (HRA) debt cap removed one of the biggest constraints on council house-building, with local authorities now able to borrow more money to invest in large-scale development. Collaboration and joint-ventures with the private sector can help to ensure that local authorities have the skills to capitalise on this situation.

The garden city principle embeds well-planned sustainable communities with a mix of housing for all. The concept dates back to a vision by Ebenezer Howard in 1898 to combine the energy and dynamism of town life with the serenity of the countryside. This seemingly utopian vision led to a number of garden city experiments and, subsequently, to the New Towns programme in 1954, which was a groundbreaking achievement in large-scale planned development.

The Town and Country Planning Act’s garden city principles today require “mixed-tenure homes and housing types that are genuinely affordable, as well as a range of sustainable and community-stewardship priorities. Alok Sharma, the former housing secretary, estimates that the new garden cities can deliver around 220,000 homes and will be crucial to long-term housing delivery. With garden cities and new towns firmly back on the political agenda, they represent the opportunity to deliver affordable housing on a large scale, maximising the delivery of quality housing that people can afford to live in.

In the current climate, crucial to the success of the new garden cities and the delivery of affordable housing as a whole is significant government funding. It is imperative that this funding is combined with intelligent intervention – and incorporates sustainable and social values which enable new communities to thrive. Unless such an approach is taken, the target of delivering 300,000 homes per year by 2025 will remain extremely difficult to achieve.

(Patrick MacMahon is a Development Surveyor based in Avison Young’s London, U.K. office.)

[email protected]
+44 (0)7919 047 973
© 2021. Avison Young. Information contained in this report was obtained from sources deemed reliable and, while thought to be correct, have not been verified. Avison Young does not guarantee the accuracy or completeness of the information presented, nor assumes any responsibility or liability for any errors or omissions therein. All opinions expressed and data provided herein are subject to change without notice. This report cannot be reproduced, in part or in full, in any format, without the prior written consent of Avison Young.
Subscribe to Blog
Popular Posts