Across the world’s leading economies, inflation is rising. Is the increase transitory as claimed, and what are the implications for real estate markets? 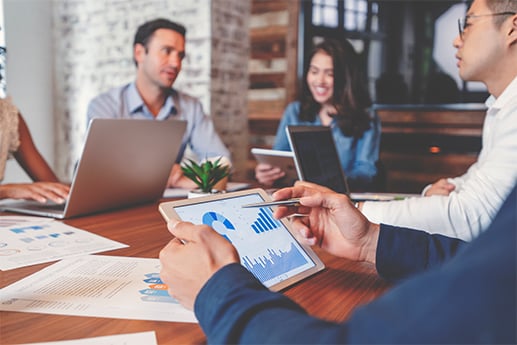 The gradual reopening from lockdown this year is causing prices to increase, prompting concerns among some commentators that interest rates may rise sooner than previously expected. Considering the causes behind higher inflation, and the guidance coming from central banks, the increase is probably transitory and higher interest rates are unlikely in the next year – possibly longer.

For real estate, while there is a perception that it is an inflation hedge, it is mostly wider market conditions that shape the performance of the sector. However, higher inflation could make the comparative pricing of real estate appear attractive. The increase in inflation reflects strengthening GDP, and we see the beginning of the new global economic cycle as a more compelling reason for investors to target real estate.

On the rise again

That inflation is rising during a recovery is to be expected, but economists have been surprised by the acceleration for prices. Germany, for instance, has gone from experiencing moderate deflation in the second half of 2020 to seeing CPI inflation rise to 2.5% in May 2021 – its highest level since 2011. While the exact criteria vary among central banks, many target an inflation rate of around 2.0%. Presently, CPI inflation is at 3.6% in Canada, 2.1% in the U.K., and 5.0% in the U.S. 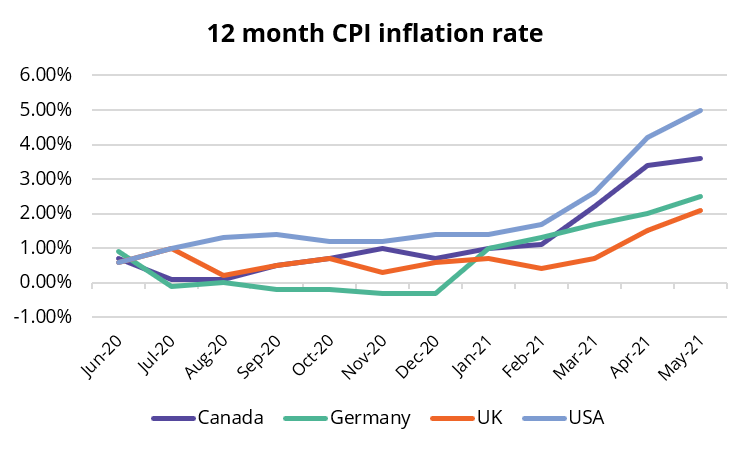 Central bankers were initially relaxed with this increase, describing it as transitory. However, after U.S. inflation reached 5% in May, the Federal Reserve Board at its June policy meeting shifted guidance from no interest rate rises between now and the end of 2023, to two rate increases in 2023 itself. This led to speculation that the Fed may further soften its position and hike rates in 2022, prompting Fed officials to respond emphasising that policy tightening is not imminent.

Is the rise transitory?

Much of the increase is attributable to factors that may in time ‘drop out’ of the index or are due to the abrupt restarting of economies from lockdown, causing supply bottlenecks which will ease with time. In Germany, the increase has been driven by higher energy prices and the end of a temporary reduction of VAT – so a mix of commodity prices and one-off pressures.

A major contributor to the U.S.’s strong May inflation figure was a surge in second-hand vehicle prices, arising from a global shortage of silicon chips delaying new car production. A recent Associated Press article reported some cars that are one to three years old are selling at auction in the U.S. for prices that are higher than their original purchase price. This situation is clearly the result of a temporary supply shortage that will pass.

Moreover, the high inflation readings we have seen lately have been 12-month comparisons to the period of the first lockdown last year. During March to May 2020, some industries saw pricing collapse, so by simply returning to normal, prices appear to have increased sharply. However, these anomalies should drop out of the inflation figures in time.

That the majority of the Fed Board are prepared to wait until 2023 to hike rates shows they do not view this particular burst of inflation as worthy of a response and only expect sustained inflationary pressures to come further down the line.

Strictly speaking, market interest rates have already risen. The U.K. 10-year swap rate is currently around 1.0%, more than double the level at the start of the year. This will ease pressure on policymakers to hike official rates, and it is precedented for central banks to ‘guide’ markets to where they want them – so talk replaces action.

If we focus on the guidance coming from the major central banks, none are hinting at a near term rate hike. The majority of the Fed Board are calling two rate rises in 2023, with a minority favouring an increase in 2022. The Fed also said it is now “talking about, talking about” when to start tapering Quantitative Easing (QE) purchases. The Bank of Canada is more hawkish than the Fed, calling a rate hike in the second half of 2022, and tapering has already begun. The ECB says it will leave policy unchanged until inflation “robustly” and “consistently” moves toward target. Given the ECB’s own forecast is for inflation to be falling away from target next year, it seems unlikely they are planning to increase rates any time soon.

Consequently, the market reaction to higher inflation and the shift in the Fed’s guidance does seem out of proportion to the current likelihood of imminent central bank rate increases. The evidence so far is consistent with rates for most leading economies staying unchanged until at least late 2022, and perhaps beyond for some. It is worth remembering that the central banks have other tightening options, like tapering QE purchases, which will probably precede a rate hike.

It is widely assumed that rising inflation will be good for property prices, being a real asset, however the situation is inevitably complex. Rising inflation sometimes occurs concurrently with accelerating GDP, and while real estate tends to do well in this scenario, it is difficult to untangle how much of the performance is due to the inflation or output growth. 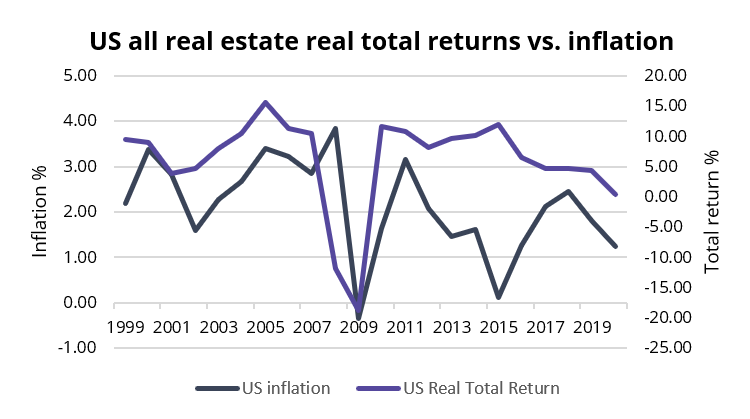 During the 2002 to 2005 period, U.S. real estate inflation-adjusted total returns grew rapidly to a backdrop of rising inflation, but market conditions (particularly debt availability) were more important drivers of performance. Conversely, between 2016 and 2018, total returns fell sharply during a modest rise for inflation – although this largely reflects an investor retreat from retail property due to the rise of ecommerce. From 2010 onwards, inflation and inflation-adjusted real estate total returns bear no significant correlation.

However, investors’ decisions are also shaped by relative performance versus other asset classes, and if we look at U.K. real estate equivalent yields against government bonds on an inflation-adjusted basis, there is a significant premium. This in part reflects the ability to increase the yield in real estate via asset management, as well as monetary policy intended to flush money out of debt and into equity. 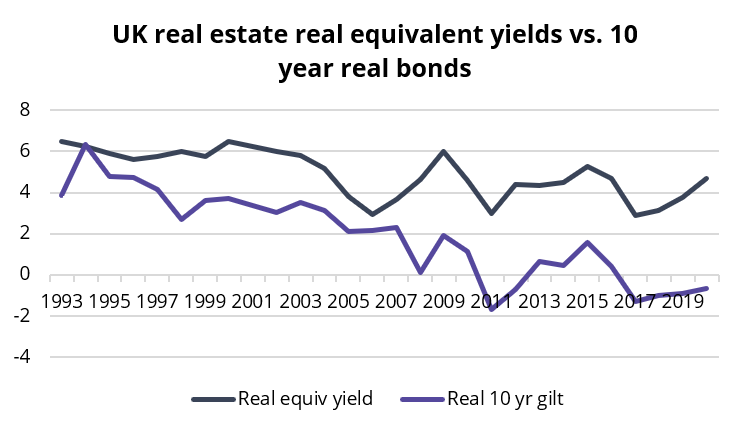 This could be something that draws investors towards property during a period where real terms government bond yields are in negative territory. Moreover, a recovering economy improves the chances of a property investor succeeding in raising the yield via asset management.

If inflation does remain elevated, we would expect more demand for property assets with indexed rents. Also, that property yields are higher than government bond yields in real terms could make the sector more attractive.

However, the lesson of the last twenty years is that the trajectory of the wider economy, and dynamics of the market for the various property sectors, tend to count for more than inflation when pricing real estate. The recovering economy is a more significant reason for buying real estate than the inflation outlook.

When trading assets, real estate investors will need to think more about their assumptions on the future level of inflation, given the risk that forecasts could prove to be an understatement. Development pricing will also become riskier if a stronger than expected economic cycle keeps commodity and labour prices high.

That the various major central banks may ultimately tighten policy on different timelines could also mean that property investors have more reason to shop abroad for debt in 2022 and 2023. Consequently, the carry trade and currency hedging might play a bigger role in the market over the medium to long term.

Still, while we are not expecting inflation to be a problem in the next few years, given the volume of QE we have seen around the world, that risk cannot be ruled out as a very long-term possibility.