Canada’s industrial market has started 2019 on a strong footing, building on the exceptional results achieved in 2018. While Vancouver and Toronto remain key markets for occupiers and investors, scarcity of product was evident in the single-digit vacancy rates posted across the country in the first quarter of 2019.

Nationally, the industrial sector remains undersupplied – demand is outpacing new development and will continue to do so, even though almost twice as much space is under construction compared with spring 2018. This supply-demand imbalance has pushed rental rates higher in almost all markets, attracting investors and resulting in low yields and rising asset values. 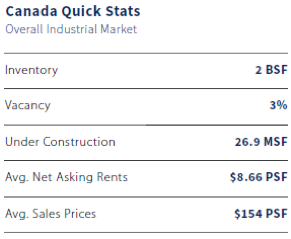 E-commerce remains the industrial sector’s catalyst for success as retailers and developers strive to perfect the supply chain. Online giants such as Amazon are impacting market dynamics in terms of scale and location with their demand for large distribution/fulfilment facilities near urban centres, resulting in rising land and development costs amid dwindling supply of developable land. This situation is most apparent in Toronto and in Vancouver, where strata units increasingly offer the only opportunities for developers to justify their land costs.

Absorption Totals Up – Twelve-month absorption totalled more than 27 million square feet (msf) – up from almost 20 msf in the previous 12-month period. Toronto accounted for slightly more than half (52%) of the nation’s absorption tally, while strong year-over-year gains were posted by Vancouver, Calgary and Montreal.

Strong tenant demand and limited supply boost net asking rents – Strong tenant demand in Montreal, Toronto and Vancouver lifted Canada’s average net asking rental rate to a high of $8.66 per square foot (psf) at the end of the first quarter of 2019. Five markets posted rents above the national average. Rents were highest in Vancouver ($11.49 psf). Regina ($10.94 psf) and Ottawa ($10.66 psf) were the other two markets achieving more than $10 psf, while Montreal ($6.71 psf) registered the biggest annual rental-rate increase – up 11%.

Inbound Capital – Investors poured $7.8 billion into the Canadian industrial property sector during the 12 months ending in March 2019 (up 7% year-over-year). Nearly two-thirds of that total was directed to Toronto and Vancouver, which also recorded the lowest yields among large North American markets (4.6% and 3.9%, respectively).

Canada’s industrial market is expected to remain active throughout 2019 with restricted supply posing challenges for occupiers and investors. However, necessity is the mother of invention, and these circumstances may lead to creative and innovative solutions for the thriving industrial sector.

These are some of the key trends noted in Avison Young’s Spring 2019 Global industrial Market Report covering 64 markets in seven countries across the globe: Canada, the United States, Mexico, Poland, Romania, the United Kingdom and South Korea.

Author email: [email protected]
Categories: Author email: [email protected]
© 2021. Avison Young. Information contained in this report was obtained from sources deemed reliable and, while thought to be correct, have not been verified. Avison Young does not guarantee the accuracy or completeness of the information presented, nor assumes any responsibility or liability for any errors or omissions therein. All opinions expressed and data provided herein are subject to change without notice. This report cannot be reproduced, in part or in full, in any format, without the prior written consent of Avison Young.
Subscribe today
Sign up to receive reports and listings