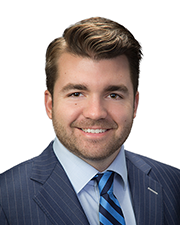 Tom Miles leads the Columbus office’s industrial platform, focusing on land development, agency leasing, and tenant representation. His expertise centers around assisting national developers in navigating market complexities, while specializing in working with landowners to prepare their sites for sale and development.

Tom, who serves clients in both the Columbus and Dayton markets, has transacted more than 400 acres of land and has had millions of square feet for national developers under lease or pre-lease. He joined Avison Young in 2016, where he gained valuable experience in capital markets, agency leasing, and the retail and office sectors. He was a member of the team that leased a new 100,000 square-foot office building in the Short North Corridor, resulting in the highest rental rates in Columbus commercial real estate history.

A native of Dublin, Ohio, Tom moved to Fort Worth, Texas to play golf at Texas Christian University, earning a B.A. in Communications. After returning home to Columbus, Tom worked as a senior media buyer for Strategic Media Placement. He transitioned to commercial real estate in 2015.