Where Is the Next Bubble Forming?

By most estimates, real estate will not trigger the inevitable economic downturn. Avison Young's Jay Maddox makes a case for what sector will.

The mortgage crisis that triggered the Great Recession is anything but a distant memory, and given the more than eight year run-up in commercial real estate values, there are concerns that another bubble is developing.

Such concerns are understandable.  Underlying economic fundamentals remain solid, however, and capital for commercial real estate is abundant.  We have not seen excessive use of leverage and financial engineering that preceded the Great Recession. While multifamily construction activity has been robust, for the most part the new units are being absorbed and commercial property prices have continued to climb. The office, industrial and hospitality sectors have also remained strong with developers and lenders taking a cautious approach to new development.

So, if commercial real estate is not likely to trigger the next downturn, what will?

CORPORATE DEBT COULD BE THE NEW BUBBLE

To be sure, much has been written about the potential adverse impacts of the trade/tariff wars, collapse of BREXIT and a softening global economy.  But how will this likely manifest itself?

A closer look at the economic data indicates that a real concern lies with exploding U.S. corporate debt, as many firms took advantage of historically low interest rates fueled by The Fed’s massive Quantitative Easing programs to increase their borrowing. Rather than investing the funds productively in the long-term expansion of their businesses, however, many firms have used debt proceeds to elevate their stock prices via share buybacks, dividends and mergers & acquisitions. While this strategy has fueled a record increase in stock prices, it has left companies vulnerable.

Total corporate debt has increased by over $2.5 trillion or 40 percent since its previous record high in 2008, to about $9 trillion, dwarfing commercial real estate debt, which is about $2.8 trillion. (By way of comparison, residential mortgages have decreased from $11.3 trillion to $10.7 trillion over the same time span.)

Corporate debt as a percentage of GDP has now pushed beyond pre-Recession levels to an all-time high of over 45 percent of GDP.  There is also a high correlation between the corporate debt to GDP ratio and the three most recent recessions, as the chart below illustrates: 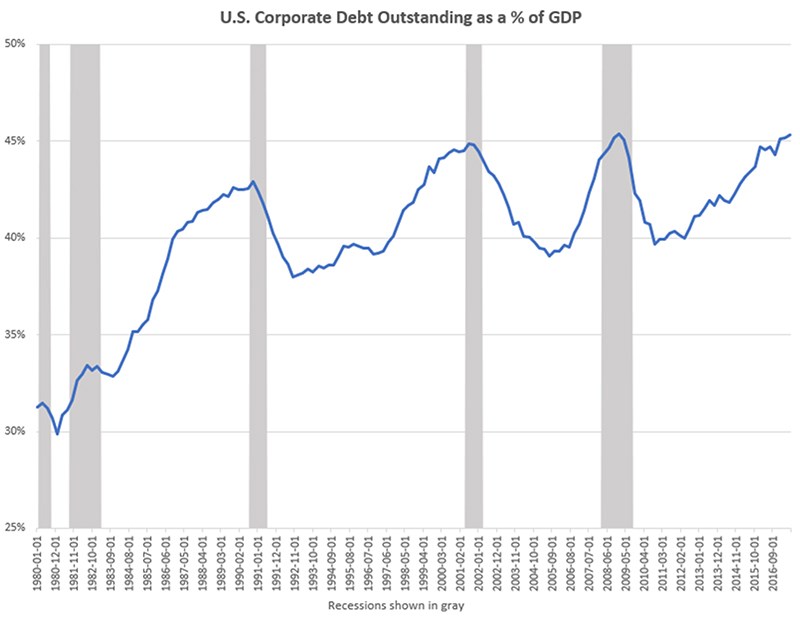 PUTTING THIS IN PERSPECTIVE

Alarm bells are going off because the corporate debt bubble may be likely to burst as monetary conditions that created this bubble have begun to tighten.   The Fed has adopted dual policies of increasing interest rates and selling off its massive holdings of long-term bonds purchased under the Quantitative Easing programs that were implemented to help bail out the economy after the financial crisis.  Higher interest rates will likely curb future corporate borrowing, and consequently, share buybacks may come to an abrupt halt, potentially triggering a sharp correction in the stock market.  Worse, more than $3.5 trillion of corporate debt is maturing over the next three years, in the face of higher interest rates.  Since debt proceeds were for the most part not put to productive uses, corporations are increasingly vulnerable to a slowdown in earnings growth that may result from other factors such as trade wars or softening of the global economy.  These factors could combine to trigger a downward spiral that many of us have not focused on.  While this correction is not imminent, and its magnitude is uncertain, commercial real estate investors should watch carefully for the warning signs and take appropriate action.

Jay Maddox is a principal in the Capital Markets Group of Avison Young. He specializes in debt, joint venture equity, structured capital and consulting & advisory services.