On September 5, for the fourth consecutive year I gave the Tenant Trends keynote at the Canadian Apartment Investment Conference.

Participation in the annual survey continues to climb with improved coverage across the country, and more than 20,000 responses this year. The report contains numerous insightful findings ranging from large increases in tenant adoption of technology, significant increases in tenant engagement in building programs, and sharply rising evidence of the affordability squeeze. The gap between what renters want to pay and what they must pay for a unit has been steadily increasing year over year. But this year, the reported percentage of income allocated to housing in all but three Provinces, now exceeds levels considered sustainable, despite incomes climbing for nearly half of all renters during that period. The housing affordability squeeze cuts across all demographics; is especially acute in Ontario; and renters under age 30 are disproportionately hard hit. 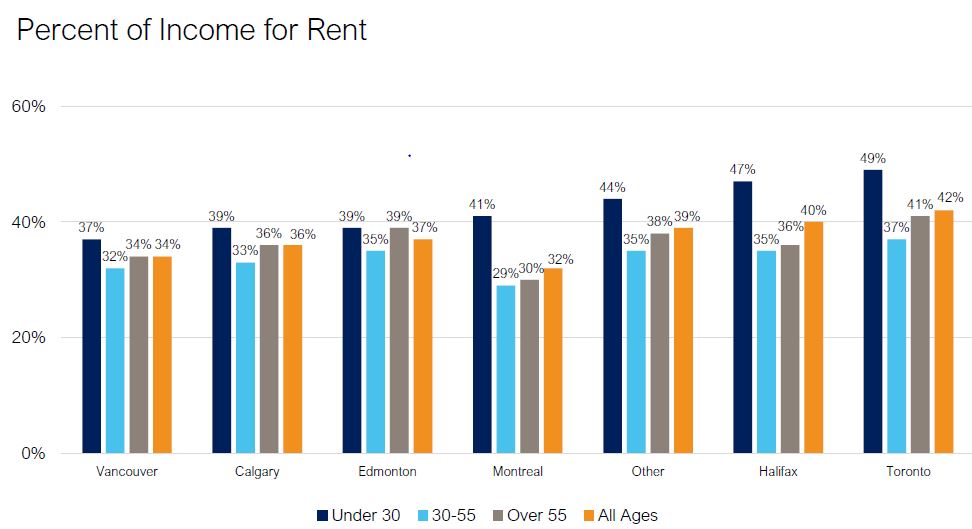 A second trend, evidencing increasing financial pressures was tenant attitudes and commentary concerning utilities. In 2016, 80% of renters indicated a preference for utilities to be included in rent. This year 80% indicated they would prefer to be individually metered to exercise more control over their energy consumption. Furthermore some 45% expressed an interest in control over systems in their own unit via a mobile app, or smart home system such as Alexa or Google Home. This is good news for landlords, where sustainability management practices have been thwarted by resistance to individual metering. Another key affordability finding: tenant would pay more rent to have free guest parking.

Year over year we saw a major increase in tenant engagement in building-wide programming with eight categories scoring over 70% for regular or occasional participation by residents. In descending order of take-up: Social events came in first at 92% participation, followed by cooking classes, volunteer activities, yoga classes, health and wellness speakers, board game & card clubs, and art classes all scoring over 75%, rounding out the list was book clubs at 70%. Not surprisingly, renters gave their managers overall high marks.

The most surprising new finding was that more than half of all residents who do not have in-suite laundries want one; and would be willing to pay more to obtain one. Comments on the survey by on-site leasing personnel indicate that this is generally the first inquiry when a vacancy is posted, prior to asking rent, number of bedrooms or baths, and whether there is a balcony, a preferred amenity by 92% of all renters. Managers reported that this trend is a reflection of the increasing diversity of the renter population in Canada, with a growing number of religious and ethnic groups showing sensitivity around this lifestyle issue.

Interestingly, when asked about co-living, 81% of respondents indicated they would never consider it. Lack of affordable housing is a hot political topic at present as all parties recognize that this issue is compounding social pressures related to income inequality. The Toronto Foundation’s annual Vital Signs Report was recently released. Its most significant finding was while showing that poverty has decreased dramatically over the past two decades across Canada, income inequality has spiked; most dramatically in the wealth disparity between homeowners versus renters. The report points to housing prices rising four times faster than income while rents are rising twice as fast over the past decade. Similar to the US, temporary jobs grew five times faster than permanent ones and part time work grew at twice the rate of full time. Families facing income insecurity, regardless of their income level, are less likely to become homeowners, which leads to an increasing sense of falling behind.

The survey indicated only 17% of all renters have no interest in becoming owners (the “renters by choice, or lifestyle” preference), whereas 40% indicated they no longer believe they will ever be able to afford a condo or home. The balance reported they are either saving for a downpayment, would not qualify for a mortgage, and/or are in a family transition situation.

The homeownership ratio in Canada is 67.8%, having fallen by about 2.5% over the past ten years. This places Canada 37th in the world; with home ownership levels 3% higher than the US, and 12% lower than Mexico, according to Wikipedia. Interestingly, home ownership levels are highest in Communist or formerly Socialist nations in eastern Europe and Asia, where rental markets have been slow to develop, and the Nordic countries of Western Europe. In capitalist economies, homeownership has been a distinctive wealth differentiator, and as home value increases have dramatically outpaced incomes. In some locations, renting has become the economically rational choice, as well as the only real option. But as rents outpace family incomes, more innovative solutions will be required, given the ones in place today (stabilized rents in the existing stock and limited incentives to increase supply) are insufficient to close the yawning gap.

To obtain a copy of the survey data or a summary report, or sign up to participate in next year's survey contact [email protected]